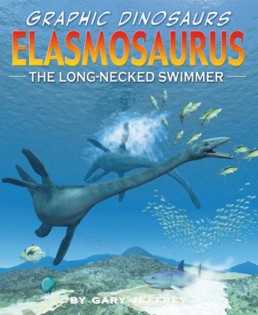 There is a great series of books called Graphic Dinosaurs.   They are full of facts, pictures and a great comic book style story about dinosaurs.   Elasmosaurus The Long-Necked Swimmer begins by describing this dinosaur with facts and pictures.  Then, there is a story about a baby elasmosaurus and his adventure in the sea.  Although the story is fictitious, the scientific findings support the story.  The story reads like a comic book.  It shows dinosaurs attacking others and eating them.  It is fascinating reading – one you can read to a child again and again.  The information is well documented and can be a great help to all ages studying dinosaurs.  After the story there is a page called “Fossil Evidence” that shows an actual skeleton of an elasmosaurus and explanation of fossils.  There is a page called “Animal Gallery” that shows the animals in the story, their sizes and how they compare to a human size.  A short glossary and index follow.   My only request would be to have a pronunciation guide so we would actually know how to say dolichorhynchops (dole-i-core-in-cops, in case you wanted to know) and several other dinosaur names.

The series of books are a copyright of David West Books.  This particular book was written by Gary Jeffrey.  Ankylosaurus The Armored Dinosaur was written by David West.  Reading this Graphic Dinosaurs series would make a great summer activity.  The local library is a super resource!